Monitoring ‘How Plants Drink’ in Order to Optimally Irrigate 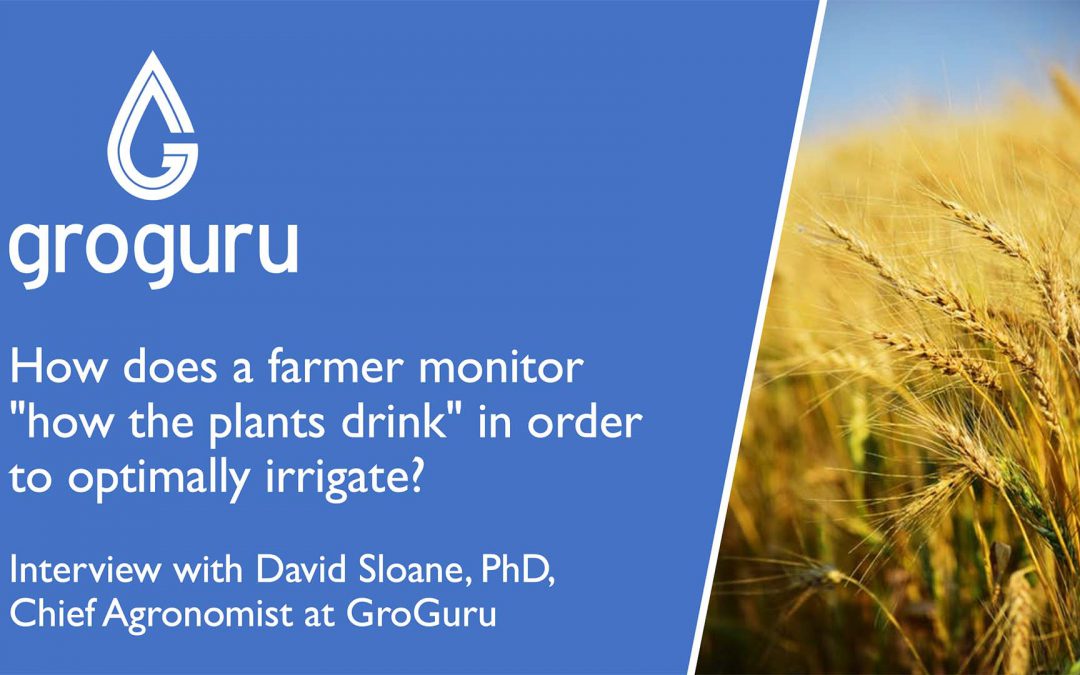 How does the GroGuru solution work to help farmers see how plants drink? In a few ways! In this interview clip with Patrick Henry, CEO and our Chief Agronomist, David Sloane, they discuss in deeper detail how the GroGuru underground system works for farmers. Watch the clip here:

Patrick:     Tell me more about what you mean by how plants drink.

David:       You can watch the plants drink in the soil moisture trend. During the day, they take moisture out of the soil. At night, they rest. There is a stair-stepping in the data. I’ll tell you a story about watching plants drink. A guy in Northern Texas used a lot of soil moisture monitoring. He had a day that was off-the-charts hot and windy. It was 118 degrees with 35 mile per hour winds. He was watching the plants drink, but he was also irrigating on an eight-day loop. It took eight days for the pivot to get around. It didn’t have a lot of flow rate. It was nice and slow drinking.

He had some sensors that had just been watered. The pivot had just come over. He was watching the plants, sitting there with a full profile. He watched it drink. Then he had other fields where it had been six or seven days since they were watered. They were pretty dry.

The fields that had just been watered tried to stay lush and green, but they used so much water. It was the biggest stair-step I’ve ever seen in any data. This was versus the plants that had been watered six or seven days ago. They were rolled up like pineapples. They didn’t look very good at all.

Patrick:     They weren’t drinking very much.

David:       They weren’t drinking very much. The farmer stopped and thought about it. He thought, “There’s something in this. I need to learn this lesson.” Here is the analogy that I like to use. If I set off into the desert, and I know it’s going to take me eight days to walk across, I take enough water to get me there over the eight-day period. I know I have to ration it. But if on day one, I drink half my water, I’m going to have a hard time making it out of the desert. I’m probably going to die out there.

Whereas, if I’ve already walked six or seven days and I’m almost out, I know I don’t have much water. I sit down and do nothing. I hunker down. In this case, the corn rolled its leaves. It just didn’t drink. The next day, away it went with leaves unrolled. It continued to drink. The farmer thought, “I don’t want my plants to die in the desert.” He backed his pivots up about a day and a half. He re-watered the area that he’d just watered. Some people thought he was crazy. Guess what? His corn survived the whole circle. Many other circles in the area had a pie wedge out of them that died.

It’s worth so much money. Think about all of the money you spend getting corn to that stage. It might be 30 to 40 acres. You’ve already spent the money on it and now you have zero return. By being able to watch what’s going on and how the plant responds to things, you can make changes on the fly. You’re going to learn something about the crop, but you’re also going to grow a better crop.

Patrick:     You wouldn’t have been able to determine that with NDBI data or other aerial photography?

Patrick:     Without soil moisture sensors, would you have been able to determine that problem?

David:       No way. By being in touch with the plants, he was able to make a decision that was worth a lot of money to him. At the end of the day, it’s all about turning water into money. That’s why we’re in the game. That’s why everyone uses soil moisture sensors. You want to put the right amount of water on at the right time to turn it into more money.

Patrick:     Thank you, David. I appreciate your time today.