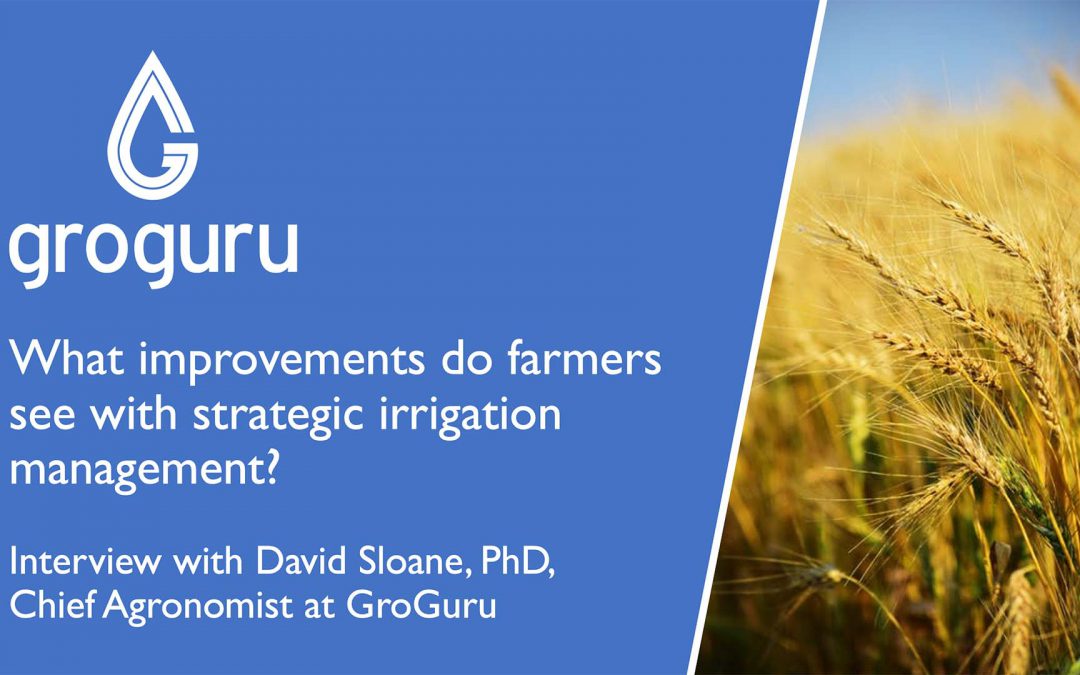 What are the improvements that farmers see with GroGuru’s soil sensor solution? There are quite a few! In this interview clip with Patrick Henry, CEO and our Chief Agronomist, David Sloane, they discuss the various improvements and how the GroGuru underground system helps farmers. Watch the clip here:

Patrick: Let’s take an example, a crop like corn. Is the average growth cycle about 160 days?

Patrick: If I were using an annual install and removal type of procedure, I am missing the first few weeks of the cycle. I’m missing the last few weeks of the cycle. That could be, on average, about 20% to 25% of the overall growth cycle. How critical is it to have the permanent install? Is there the potential for improved crop yield versus the traditional method and improved water efficiency?

You’re putting water on. You’re irrigating at the start. Are you doing it the right way? Also, you want to see that root system grow in so that you know what’s going on there. Quite often, for whatever reason, the sensors get installed late. Maybe it rained when you were out there to install. Maybe the pivot was over the top. Something happens and you get it on the next cycle. That may be another two or three weeks later.

Patrick: There is a re-calibration required.

David: There is a re-calibration required. Then the roots are already grown in. You don’t have a baseline to work from, which makes it very difficult to really understand the starting point. At the end of the season, you can make a massive difference.

I’ve had customers in the Oklahoma Panhandle who have had a 20-bushel swing based on whether they put on another irrigation or not. This was a farmer who had over irrigated at the start. He had lots of water. He put lots on early on. He had created a shallow root system. He made the plants lazy.

When he got to the end of the season, his agronomist was out there checking the fields. He was sampling with a six-foot push probe. He said, “We’re sitting on all this moisture. It’s great. We can shut down the pivots.” I had a look at the soil moisture data and said, “That’s great. You have lots of moisture there. But you have a really shallow root system. It’s only 20 inches deep, even though you might have six feet of moisture.” It’s like having a tall glass with a really short straw. You’re not going to get all that water out. By knowing where the roots were and knowing that it was quite dry, he was able to keep irrigating and got an extra 20 bushels. At the time, it was worth $6 a bushel. That was a lot of money.

Patrick: Give me the perspective on how that’s relative. What’s the yield on a per acre basis? What was he getting? With the 20 additional bushels, what percentage of the overall was that?

When monitoring what you’re doing, you want to make every year a good year. You want to get that extra 20, and certainly not lose it. Quite often, the loss is a surprise to farmers. They think they’ve had a good year, but in actuality, it looks showy because it started well. But then it finished dry and they didn’t realize they got caught out. Unless you know what you’re dealing with, you’re flying blind.

Patrick: There is a huge value proposition. The cost per acre per year of use of soil sensors compared to the typical yield improvement alone, not including cost savings, this is a multi-x per year return on investment.

David: Yes. As it is now, corn is in the $3 range. If you can get a 5-bushel increase per acre, $15 will go a long way to pay for this. It depends on how many you have out per acre. If you get a 10-bushel increase, then you’re getting a really good return on your investment just in the first year. It’s more than a full payback. Then you add into that 8 to 10 years for the equipment and a very low running cost. You don’t have to install it and remove it every year. This is with the GroGuru solution. The returns are phenomenal.

Did you enjoy this video? If so, leave a comment and let us know what you liked! We appreciate your feedback! We are happy to talk with you about your specific sensor needs and benefits. Please contact us today to get started.